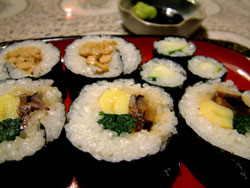 Are you looking for California Rolls recipe?
Prepare rice for sushi ( about 6 rolls)


[1] "Gu" in Japanese refers to the stuff that goes in the center of a sushi roll.

[2] "Kanpyo" are dried shavings from a calabash gourd. If kanpyo is not available, it is OK to make futomaki sushi without it.

Our Most Popular Recipes